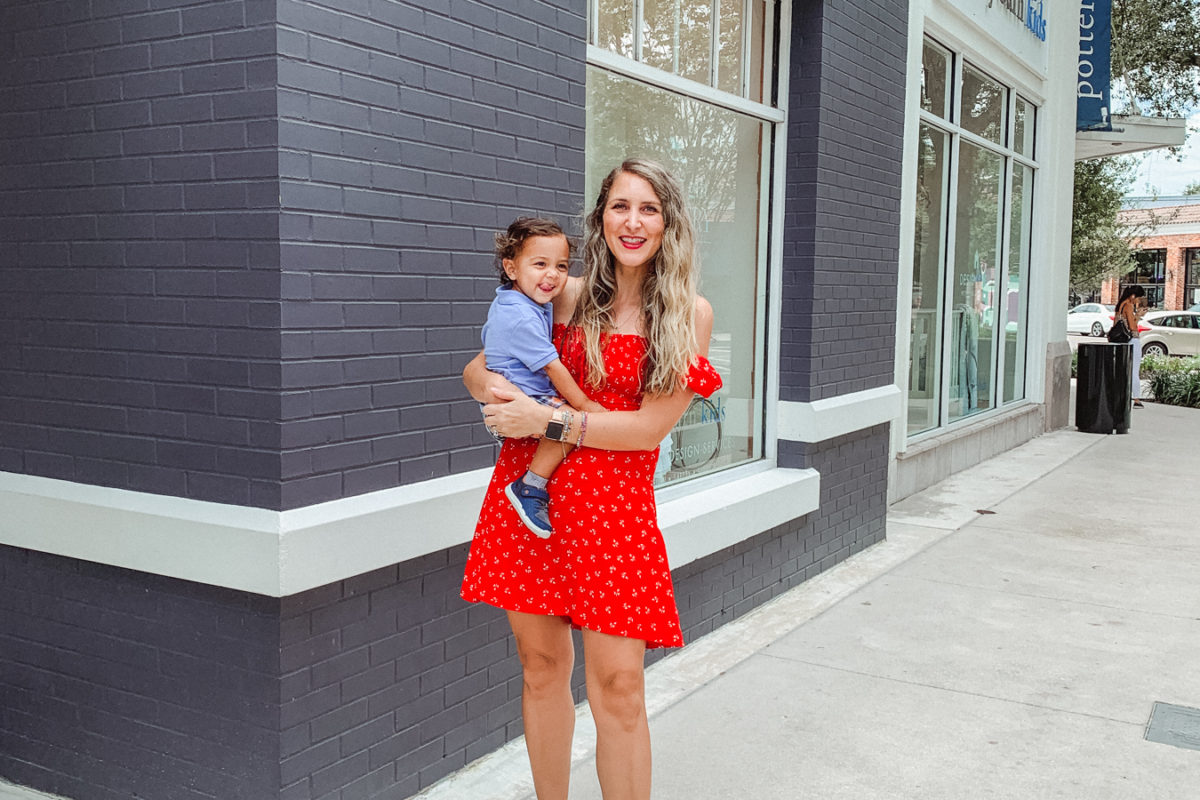 I know this is not a groundbreaking life-changing type of post but it was something that I got so many inquiries about on Instagram when I talked about it that I thought it would be a well-received blog post. This is the reason why I quit getting the lash extensions. Eyelash extensions are the new hot thing right up there with hand-tied hair extensions. I had been getting lash extensions for over three years and finally found my “go-to” girl who did a phenomenal job. I could pretty much go once a month and they looked perfect for a solid three weeks. Being a mom it gave me back a solid 15 minutes of my morning get the ready to time and to me, that was huge considering the fact my makeup takes me less than 5 minutes (pretty much swipe whatever is leftover from my makeup brushes) and out the door. I felt put together even when I rolled out of bed late. When I was sleep deprived it made me look a tiny bit more awake. It was just an overall easier time feeling like I wasn’t a walking zombie.

Editors note:  This post has been getting a lot of traffic.  I would love it you would take the time to pin to Pinterest and follow me on my social media outlets.  This is my Instagram account and Liketoknowit.  Thank you so much for your support!!

So what made me stop you ask? Quite a few reasons actually. 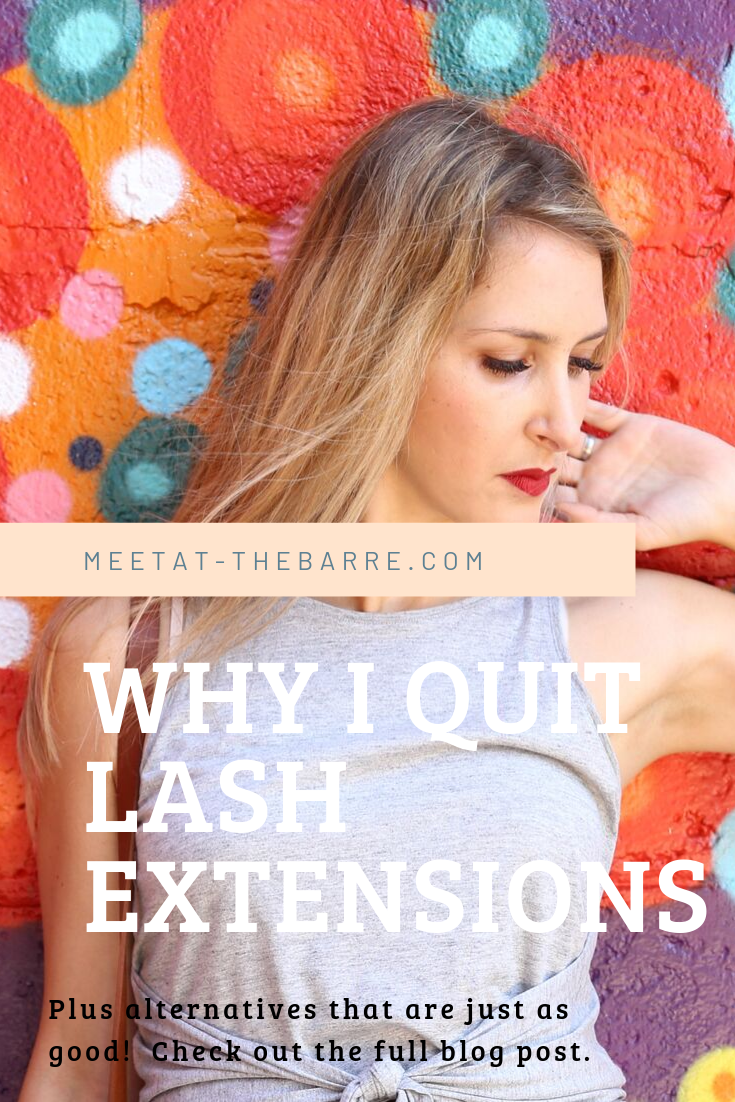 It was such frivolous money guys. I was spending over a $100 a month to have someone glue extensions onto my lashes. That is $1200 a year! When you think about it, it’s really excessive. I have actually used part of that fund to buy an on-demand workout app which I feel like is money better well spent. Plus, I was so sick of finding those lash clumps all around the house. In my sheets, the bathroom floor, the sink. It was really gross. It just felt like a little too much to spend every single month when a tube of Latisse costs that much and lasts me three months.

It Was “Too Much” for Everyday

I am a Nurse Practitioner by day and y’all when I would first get them done, I would literally feel my patients staring at me like is this girl really trying to tell me about my kid’s heart defect and she looks like she is ready to have Glamour shots right now? I even had some cut me off in the middle of my education to ask me if my lashes were fake. I mean they looked so pretty but they were obviously really fake. Like there is no way they were natural. It was so easy to get ready and go out just add a tiny bit of liner and red lipstick and I was done but for every day, I just felt like it was too much. Honestly, with all that said doesn’t it just feel like we are adding so much fluff onto ourselves? Lash extensions, hair extensions, fake tanner, lip injections, etc, etc. Can we go back to a little more fresh-faced and real around here? I’m just overall the pressure to look so over the top all the time.

It Started to Freak me out

If you have had lashes put on you know when you leave there your eyes are red and inflamed. Like that can’t be good for your eyes right? What kind of chemical fumes is seeping into my eyeballs? I had a terrible vision growing up and had two rounds of Lasix in order for me to stop having to wear contacts. I never want to do anything to compromise my vision. I know it’s only for a short amount of time once a month but it just started to bother me what toxins I was allowed near my most precious assets.

I Hated Coordinating to Someone Else’s Schedule

I am a busy working momma and I never know my schedule really in advance. I was terrible about booking my appointments early and before I knew it, it was time to get a fill and there was no availability for two weeks or I was having to go on a weekend when it was precious time away from my kiddo. It just felt frivolous after a while having a day off to run errands and get my lashes done. Maybe I’m just getting really low maintenance now but I hate having to coordinate with someone else’s schedule when my time off is very precious and few and far between.

My Natural Lashes Were Wrecked

Now I know they say it doesn’t make your lashes fall out and your own natural lash cycle allows for shedding every month, that’s not what I’m talking about. Perhaps it was because I had them on for so long but my lashes were tiny little nubs when I let the extensions fall out. I didn’t lose the number of lashes I actually had but they were so short! I think because the volume lashes were so heavy on them that they didn’t allow my own lashes to grow long and strong. I used to put Latisse on when I had them but then I found it made the lashes fall out quicker having the liquid by the lash line where the glue was.

When I let them grow out I couldn’t even get mascara on them for a solid month. There was no lash to grab with the wand. It took so much patience but I finally after three months have lashes that look good again with mascara. That was telling enough for me to never go back.

There are so Many Good Alternatives

Once I got my lashes off I got back onto the Latisse train and then ordered the Rodan + Fields Lash Boost. It is expensive but I am going strong with the same tube for two months and there is still plenty left. I do put it on a tiny applicator brush so a little goes a long way along the lash line. My lashes are growing back long and strong with my alternating of those two. I also got the Moxie Lash magnetic eyelashes when I want to extra glam it up going out or shooting pictures. My favorite is the Sassy Lash but I also got the baby lashes for every day. It totally works! I have NEVER been able to get false eyelashes to stick with glue but these are like witchcraft. Insiders tip, shake the bottle well before you use it, let it fully dry (like at least 5 minutes) grab the lashes with tweezers and plunk them down where you want. Try not to readjust too much because it pulls the liner and sticks to the magnets then they don’t stick as well. Then use a light cleaner like Bioderma to clean them when you are done. I am a total convert! I also started using the Thrive Cosmetics mascara (the dang commercials on FB got me). I LOVE that mascara. It curls and lengthens beautifully. I like how it tubes off with warm water and doesn’t leave any raccoon eyes. I do hate you have to buy from them directly but they sometimes have free codes for shipping. I also picked up the blur CC cream and it’s better coverage than the It Cosmetics in my opinion. I also really like that the wand is weighted. It’s worth the price tag.

I really loved getting lash extensions. They made me feel pretty, put together, and made my mornings easier. I have moved on and my own lashes are strong and long again. I can glam myself up with some extensions and a little extra effort. Would I get them again if I was going on vacation or had a big life event? Heck yes but my days of sustained monthly maintenance are over. Tell me if you have or had lash extensions and what your thoughts or pet peeves are? Have you broken up with them yet? Tell me why! Also, this post felt so OG and awesome to me. I really want to get back into these real-life posts. Ally was one of my favorite original bloggers and she is back. I am so inspired by her how it used to be kinds of posts and I really want to get back there! Anyways <3 you guys! Hope you are having a great week!

Previous Trending for Fall – Leopard and Leather
Next Shopbop Fall Sale is Live!

Is a Side Hustle the New Normal?