Most of you only know me as a Florida girl but I am actually born and raised right outside of Boston.  From there I moved to Gainesville, FL to attend the University of Florida.  Then back up the coast to Philadelphia for Grad school at UPenn.  Besides the few times I’d catch the train into NYC from Philly, I was never a big New York traveler. When Mark and I started dating, I knew I had met my traveling buddy. Actually, early on in our dating I remember blurting out to him I can always travel in a carry on no more what.  He didn’t believe me but now he does.  It was Mark who made me fall in love with New York.  I personally believe the most magical city around the holidays is NYC.  The buildings light up with twinkling lights, the snow lined streets, and the hustling shoppers.  We always try to make it up there during that time to get into the holiday spirit.

My birthday is July 5th and Mark’s is July 11th.  For our combined birthdays we always take advantage of the long weekend and travel to a big city.  Have you read my post for the best cities to travel to for a long weekend?  This year it was actually my idea to head to NYC and Mark happily obliged.  We immediately headed to my first stop when it comes to research for hotels, Trip Advisor.  We like staying in MidTown since it makes everything accessible in the city either by walking or the trains.  My Aunt had actually sent me the link for the Knickerbocker Hotel and after reading many recent positive reviews it rose quickly to the top of our list.  Then when I found out it had a rooftop space and I was sold.  Anytime I travel, the first thing I scoop out are the rooftops spaces and The Knickerbocker is where it’s at.  Plus, I love hotels that are historic and have a story.  This building has been around since 1906 (it was the home to Newsweek Magazine in the 50’s) and was recently renovated and reopened as a hotel in 2015.  It is centrally located at 42nd Street and Broadway.

The Knickerbocker was very reasonably priced for being a 5 Star resort and there were breakfast packages that could be added into the deal as well.  It had a boutique feel without being small and cramped.  When I called to confirm, the concierge picked up and was extremely warm on the phone.  Already, I was feeling good about this decision.  We actually spent the first night out in Long Island with some college friends and then headed into the city arriving in Penn Station.  The hotel was an extremely easy walk with luggage, aka didn’t have to pay for a cab or Uber score!  When flying into NYC, there is an AirTrain that picks you right up from the JFK that you can take out to all the major train lines, the Long Island Railway, out to New Jersey, into the City etc.  Even though the hotel is right in the hustle and bustle of Times Square, the minute you walk in, the noise fades out.  There was no wait for checkin and we were upgraded to a Junior Suite on the 16th top floor.

Now if you have ever stayed in hotels in New York, you know one thing, the rooms are usually very small.  Like minimal room to walk around the sides of the bed.  I was very impressed with the size of this room.

The bathroom was a mini spa retreat and the amenities were on point.  Never have I seen so many personal touches that made so much sense, a shave kit, nail kit, and even a shoe buffer.

The bed was extremely comfortable and the tv.  We didn’t want to leave.  It was HUGE!  Plus, it swiveled out so it could be pulled right in front of the bed.  I enjoyed watching shark shows on Discovery channel in the morning.  We could look right outside the window and see the ball that drops in Time Square on New Years Eve.  There were black out windows that were controlled with remote, so no need to worry about the bright lights of Times Square.

I always like getting a fridge when we travel so we can have cold drinks, a place for leftovers, and the ability to have a few snacks. Unfortunately, a fridge was not available the first night.  We stayed up waiting for over an hour and nothing arrived.  I finally called a little frustrated and was told there were none available.  Well, that would have been nice to know before we waited up.  How I judge any customer service situation is how things are handled.  The next morning I was called by the manager who apologized for the situation and offered to immediately move us to another room.  We had already unpacked and didn’t want the aggravation.  We told her nightly ice would be fine and she sent us up a bottle of wine to smooth things over.  We also had breakfast comped at the end which was more than enough of a remedy.

Every morning we headed down to the breakfast buffet.  Great service and a nice selection.  The area was clean, well bused and the waitstaff was incredibly attentive.

If you want a quick grab and go lunch, they have a great cafe on the ground level that you can have a coffee and muffin on the way out.

The hotel is extremely central to all the major hotspots.  We were a few blocks from the train station, Bryant Park, the shopping district, and Central Park.  We also headed to a Broadway play and it was a 10 minute walk.  Mark actually commented this was his most favorite location of a hotel we’ve ever stayed in the city.  I completely agree with that.

We had the opportunity to dine at the hotel for dinner (the Charlie Palmer at the Knick) and since we had a late night back from the show, we ordered room service.  Burgers in bed while watching late night tv, that is my favorite night in.  The dinners were pricey but so is everything in New York.  I highly recommend the burger.

I saved the best part for last.  The rooftop bar.  Can you even imagine how amazing this spot would be for New Years Eve to watch the ball drop?!  I have never seen it so close!  There was plenty of places to sit and the staff was very attentive.  The drinks were a little steep but what do you expect for a rooftop bar in the Summer in New York.  I opted for a beer which was a little more budget friendly.  We also had a few apps, the wings were Marks favorite vote.

I can genuinely say this has been our favorite hotel we have stayed in New York City to date.  The location, the service, the quality, the food, and the rooftop space were the complete package.  We already have our sights set on it for December.  If you are trying to narrow down a hotel in NYC, I highly recommend you check out The Knickerbocker.  It is a a luxury hotel that doesn’t feel pretentious. It is large but has a boutique feel to it.  The staff was extremely accommodating and you cannot beat the location.  I mean look at this view right outside the front door.  If you have any questions please feel free to shoot me an email!

Thank you to the Knickerbocker Hotel for sponsoring this post.  All opinions are 100% mine.  Thank you for supporting the brands that work with Meet @ the Barre.

Previous How to Budget Friendly Update Your Blog Design
Next Friday Favorites – The Nordstrom Anniversary Sale 2016 is Live!

How to Pack In a… 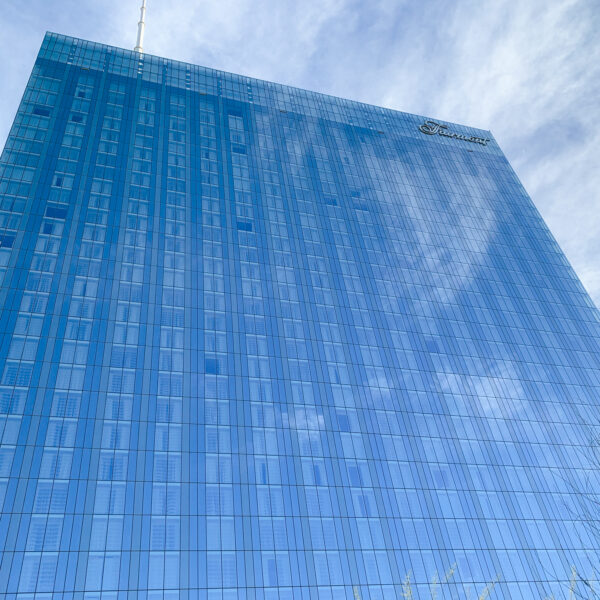 Review of the Fairmont Austin

The Life is Beautiful Festival…